Built in 1968, the beloved Bob Shelden Field in Brookings, South Dakota, was named after a local student-athlete who battled Non-Hodgkin’s Lymphoma shortly after graduating high school in 1959. With the facility accommodating over 25 teams and 150 games each year, the city wanted to extend field usage and modernize the game night atmosphere with a $2.5 million facility renovation project. A portion of the funds would be directed toward upgrading its 40-year-old lighting system, which was underperforming and included deteriorating support structures. To achieve its lighting goals, the city needed an advanced LED system that would ensure superior visibility well into the future.

Musco helped educate project leaders on the capabilities of LED technology and explained the benefits of the company’s system approach, which led the city to install Musco’s Total Light Control – TLC for LED™ system. The system increases on-field light levels and uses Musco’s BallTracker® technology to emit targeted light upward, making it easier to track the flight of the aerial ball at night. Musco’s complete system approach includes new galvanized steel poles that ensure long-term reliability, while its Control-Link® service enables staff to remotely operate the lights with the touch of a smartphone. Additionally, the city gains Musco’s comprehensive warranty and won’t pay any maintenance costs until the year 2045.

“The Musco lighting system is the best bar far with great communication, warranty, assembly and attention to detail. Musco has the only lighting system we will install for those same reasons. We are always confident that the end user will be satisfied and knowing that we are helping the community.” 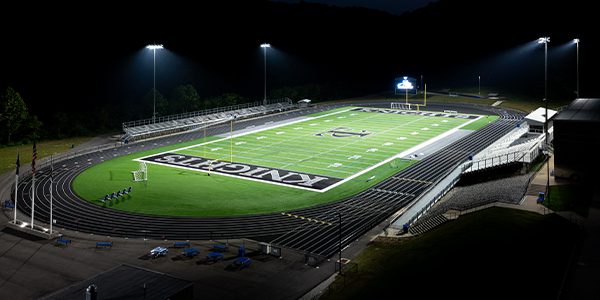