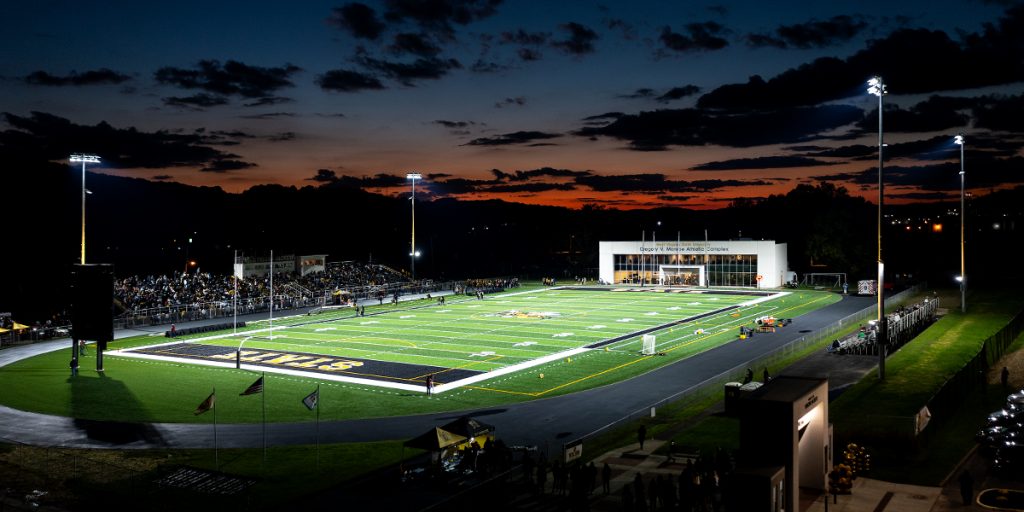 West Virginia State University (WVSU) is an 1891 land-grant Historically Black College and University (HBCU). Until recently, WVSU was the only member of the Mountain East Conference that did not have artificial turf on its football field. Dickerson Stadium was also without lights, which meant the Yellow Jackets had never been able to host a night football game. For nearly 30 years, other pressing needs combined with limited financial resources kept both turf and lights out of reach for WVSU.

WVSU partnered with the Honey Bear Project, a non-profit organization dedicated to improving athletic facilities at HBCUs, and Musco. WVSU installed Musco’s Total Light Control—TLC for LED™ system, which creates safer playing conditions by producing uniform light levels on the field without affecting players or fans with glare or spill light. A Show-Light+® entertainment package adds excitement to the game experience for both players and fans, while 24/7 Control-Link™ monitoring allows staff to turn the lights on or off instantly, from anywhere, with the touch of a smart phone. To top it off, Musco’s 25-year parts and labor warranty means WVSU won’t pay any maintenance costs until 2046.

“Working with Musco has been tremendous from start to finish. They were accessible and they delivered on exactly what they said they were going to deliver on. With the different controls, and the ability to change colors and sync them with the songs, it’s one of those things I think fans will want to come to see and keep coming back for.”

“The excitement about this facility in the community and among our alumni as word has spread just built. We had a recruiting visit for high school football players during homecoming. Initially, we had only reached out to a few recruits, but they were calling us because they heard about this field and they wanted to see what’s going on here. It’s going to be huge for recruiting for us and for the impact that we can have on the community.”